In previous articles we talked about chess Crimean chess and checkers Museum displays the cultural traditions of the country under which they are stylized. For example, the stylization of the Greek chess, as well as Egyptian chess, associated with legends and myths. All figures presented in the image is known Gods and Goddesses. Styling Natural chess connected with the Ukrainian Cossacks. Russian chess is not only the cultural themes of the Russian people, but technique and scenery pieces.

Just want to note that the Russian chess decorative Russian Khokhloma painting, where traditionally dominated by red and black colors. The king is styled in the way of yard magistrates, who is in charge of military operations on the Board. It is known from history that the magistrates were divided into Governor the right and left hands, whose role on the Board play elephants. Chess Queen, but in common, the Queen, is styled in the image of the Russian Princess. Rook and knight has not lost its usual form, however, quite gracefully painted.

Special attention should be paid to the pawn. his figure was made in the image of the matryoshka- the most common toys of the Russian people, which is very popular with foreigners as a souvenir it is about Russian culture. When exactly appeared matryoshka is not known, but one version says that the first time it made Zvezdochkin in 1890, and was painted by a professional artist Malutin. One of them, usually consists of 8-10 pieces, but the biggest doll in the entire history of the existence of such dolls has in itself 72 figures. 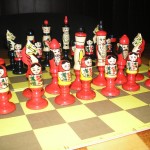 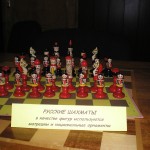