In article Crimean chess and checkers Museum we drew your attention to the fact that it presents exhibits, stylized under a different era and culture. Since the Museum is located in Ukraine, the collection is hard to imagine without exhibits, transmitting the history of the Ukrainian people and telling about the culture of that time.

History of Ukraine covers a sufficiently large time period and is full of interesting facts. Ukrainian Cossacks appeared in the late fifteenth century and lasted until 1917, was one of the most interesting objects to study. The authors of the Ukrainian chess” presented chess pieces in the images formed based on the culture of the Cossacks.

The image of a pawn, tells us that we have a regular Cossack that era. Deeper into the story I want to tell you that the right to belong to the Cossack estate was inherited. Formally record in the Cossack troops to other persons are not excluded. They were obliged to do military service for 25 years. Only time they could get the order of nobility or rank.

The leader of the Cossacks was the chieftain, at the chess Board is the king. Initially, the chieftain had no great power. He was the executor of the decisions of the military circle. Should be, this fact wanted to emphasize the author: on the one hand, the importance of the king in a chess game, and on the other, his little impact in the game.

Help the chieftain was elected two military senior officers, in chess it is the bishops. Note the interesting detail in the clothes of a king and elephants. Headdress testified to the important status of the Cossack. As you can see, he is only the king, which explains its great importance in the game than bishops.

The Cossacks were excellent horsemen. They were taught to ride a horse without stirrups and saddles. Perhaps that is why in chess knigts no fighting equipment.

Rook presents in the form of towns. In the XVI-XVII centuries it were permanent settlements, not related to urban settlements, which were used for military purposes. They were strengthened in different ways: for example, were given land by the shaft and netting, laid on top of the bushes, prickly thorns, making settlements reliable military post.

The role of women in the Ukrainian Cossacks was great. She had considerable rights, was able to dispose of his property and to choose a husband. So the chess Queen, the figure with the greatest possibilities in chess, took on the guise of an ordinary Ukrainian women, explaining its significance and role in the life of that time. 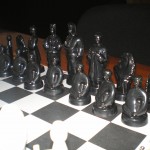 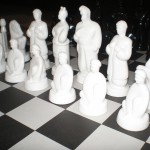