“Egyptian chess” can rightly be considered one of the most unique exhibits of the Crimean Museum of chess and checkers. The figures are images of the Pharaoh and the gods of Egyptian mythology. Note the clothing of the figures. From 3000 to 2400 BCE clothing men was loincloth – shenti. In such clothes, dressed all chess pieces.

The most common colors were red, blue and green. The Golden color was the privilege of the pharaohs. As the clothes on the body were not enough, the Egyptians adorned with its accessories. Even the pharaohs wore gold shenti exclusively on important ceremony. As we can see, this color gives the chess sophistication and mystery of that time. In Egyptian mythology there are many gods. One of the most famous is Anubis. He was portrayed with the head of a Jackal. This God was considered to be the conductor of the dead to the afterlife. Manufacturers of these chess thought of everything down to the smallest detail. Styling pawns under God Anubis is not casual.

Every player knows that the pawn while the lowest figure upon reaching the last row can be reincarnated into any shape. The God Anubis in ancient Egypt was a guide to the afterlife. The stylization of Anubis in the form of a pawn involves the death of a pawn and the transition into a new life. Chess rook made in the form of an ancient obelisk. The authors of chess have tried to accurately portray its features. They were installed on a pair at the entrance to the temple, praising the sun God RA. A pointed shape, Golden hieroglyphs it is all part of the obelisk. Elephants made under God Home guardian of the Nile. He was depicted as a man with the head of a RAM with spiral rogali. Chess knight stylized in the form of the sun God Horus. According to the legends, he was the patron of the pharaohs. Interesting fact that the Mountain had the enemy by the name of Seth, which represents the night and the darkness. Every morning the Mountains were defeated Seth and evening Seth won the Mountain and sent him to the underworld. This struggle occurs in the game of chess. Statue of Tutankhamun in the role of a chess king was not chosen randomly. We all know that the Pharaoh of the new Kingdom came to power in early childhood. The king looks weak figure. However, the most important. Without it the game would last forever. Comparison of infant helplessness on the one hand and their role in our lives allows us to assess the true role of this figure on the Board.

Queen made in the form of the goddess Nehbet. It is highly goddess, the patroness of the power of the Pharaoh. The Queen is the strongest piece on the Board. And is next to the king. It is designed to protect. I think that’s why the author chose it from the thousands of gods in Egyptian mythology. 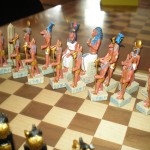 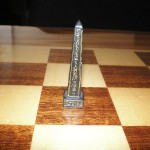 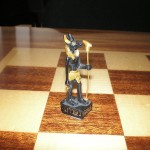 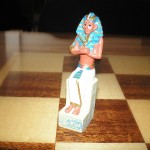 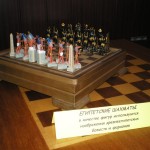 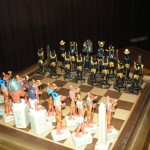